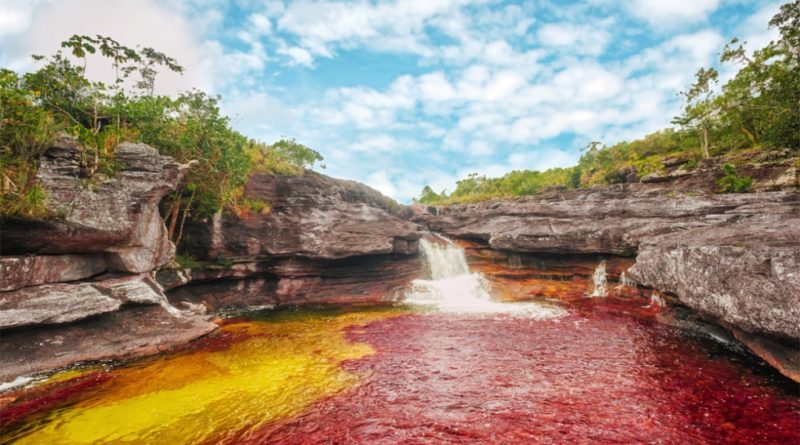 Sailing Stones — Here’s a phenomenon that has occurred in various locations around the world … but most notably at Racetrack Playa in California’s Death Valley National Park. Huge rocks, some weighing up to 700 pounds, seem to move all by themselves, with no apparent intervention from humans or animals … often leaving trails over 300 feet long. Some trails were curved, while others travel in a straight line, then abruptly shift to the right or left. What’s behind the mystery? Some theories suggest the big stones move as a result of water and ice forming in Death Valley under certain winter conditions. A breeze could then “float” the rocks across the muddy bottom of the valley floor … leaving trails in the mud as the stones moved. Research conducted in 2015 suggested that sailing stones found in Spain’s Manchego (man-chay-go) Lagoon moved as a result of microbacteria living on the lagoon floor. The microorganisms created slippery conditions allowing the stones to move during the rainy season when wind and water currents were at their strongest. No theory has been been definitively proven.

Cave of the Crystals

— it’s located almost 1,000 feet below the surface in Naica (nigh-ka), Chihuahua Mexico … and is known to hold some of the largest natural crystals ever found. While they look icy, the massive crystals are forged in temperatures up 122 degrees Fahrenheit … and were developed over 500,000 years in mineral rich water … and they can measure up to 4 feet wide and 50 feet long! These hidden caves were drained over 40 years ago, but the crystals made of gypsum were unearthed by miners in 2000. Because temperatures in the caves can reach 136 degrees, and humidity nearly 100%, they’re largely unexplored. Researchers can only enter for short periods. In order to preserve the crystals there are plans to re-flood the cave 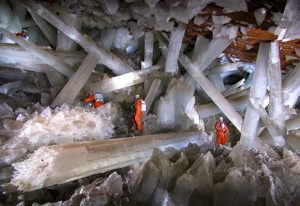 — In northern Lebanon, you can find a very unique three-tiered waterfall where water crashing some 850 feet through cavernous gorges and circular rock formations … An actual triple waterfall! The water plummets into a cave formed out of Jurassic-era limestone called the Baatara Pothole. Inside the cliffs is a labyrinth of tunnels lit only by occasional patches of sunlight. The cave is also called the Cave of the Three Bridges due to the natural bridges that overhang a fissure that descends into Mount Lebanon. The waterfall and cavern is considered ‘one of the wonders of Lebanon’. We’re inclined to agree! 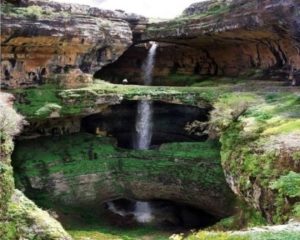 — So this one might not be a recurring weird wonder in nature … at least we don’t think so. But it just looks so weird that we had to include it. Your eyes don’t deceive you … those are goats that actually climbed a 17-foot tree in Morocco. How did this come to be? Well, these animals seem to be accomplished at climbing trees … and they jump and claw their way up the branches searching for the tree’s olive-like berries … which the goats will go to any heights to reach. Of course, goats are known for their ability to scale steep, sheer surfaces … In fact some of their relatives, the Alpine ibex scaled the sheer side of Italy’s Cingino (chi-geeno) Dam in 2011 as they tried to feed on salt leaking from between the stones. It almost looks like they’re floating on air, doesn’t it? Goats climbing sheer surfaces … okay, that seems to be a weird wonder of nature that happens regularly. But goats climbing trees … that seems pretty unique. What do you think? 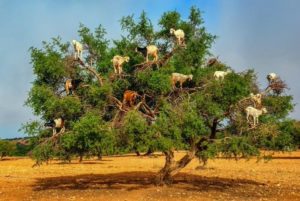 — It almost looks like a Photoshop effort, but this is a natural phenomenon. Located on Sakhalin (sack-lin) Island in East Russia. From high above, you can make out the pupil in the center of the volcano, which is surrounded by a brown iris. Mud volcanoes are caused by a buildup of gases and liquids … with pressure built up, mud is released through fractures in the volcano’s structure, and that can create bizarre patterns … as you can see. Did it make you blink? 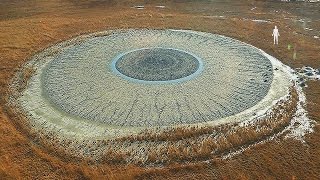 — It’s located in Colombia and is commonly called “The river of five colors”, or the Liquid Rainbow. Due to its striking colors, it’s often referred to as the world’s most beautiful river. You can detect green, yellow, blue, black and red in particular … but only during half the year … that’s because of a native aquatic plant called macarenia clavigera (mack-a-reenia clav-I-dra). The plant is what gives the river its distinctive colors, but it’s only active between June to December. The river is closed the rest of the year to give the local ecology a break. Skittles 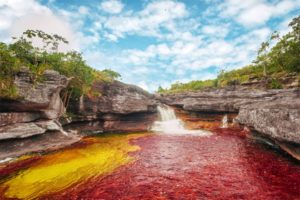 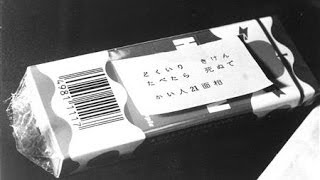